The FNB Estate Agent Survey for the 4th quarter of 2012 completes the residential property picture for the year 2012. Despite agents reporting a slightly weaker residential demand picture in the final quarter, 2012 as a whole was seen as a better year than 2011, while the Average FNB House Price Index growth rate for 2012 also reflected a slightly better year than 2011.

This improved residential market in 2012 in terms of demand and sales volumes, albeit still not a market “firing on all cylinders”, can be viewed as the lagged impact of an improved economic growth rate since the 2008/9 recession, which has gradually improved home buyer confidence levels. Accompanying this has been a steady improvement in home affordability since 2008.

The 2 traditional affordability measures are shown in the accompanying graph. The average house price/average employee remuneration ratio, provided in index form (Q3 2000=100), has declined by -25.5% since the peak of “in-affordability” in the 1st quarter of 2008 up until the 2nd quarter of 2012 (labour data for subsequent quarters not yet available).

The 2nd measure of affordability is the “installment repayment value on a 100% loan against the average priced house/average remuneration ratio (also in index format)”. This ratio has declined far more significantly, by -47.6% over the same period, due to the added impact of huge interest rate reduction since late-2008.

It is possible that many agents perceive income levels “keeping up” where it is actually more an interest rate cutting effect. But the outcome is the same, i.e. improved housing affordability since the end of the real house price boom early in 2008.

The results of improved economic performance, and some years of affordability improvements, can be seen in the improved ability of new entrants to enter the residential property market.

The FNB Estate Agent Survey has pointed to some years of improved 1st time buyer activity, with 1st time buyers in 2011 and 2012 estimated at 23% of total buyers. This is significantly higher than the 15% low of 2008.

But it goes further. One of the pressing goals in South Africa is to eliminate the very significant income and wealth gaps that persist on a racial basis. Certainly we hear encouraging indications that this process is happening, with StatsSA’s release of the most recent census results, released late in 2012, pointing to further reduction of the racial per household income gaps since prior censuses. However, the pace of this transformation concerns many. 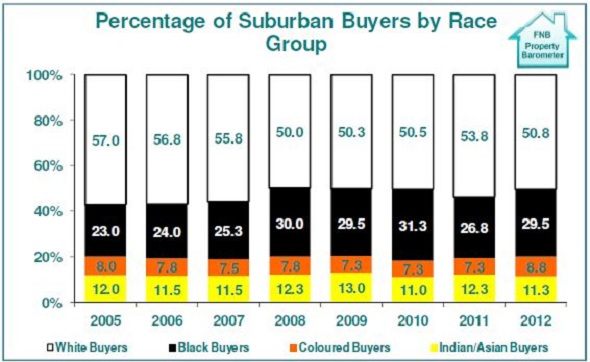 In terms of race-based home buying, what are we seeing? Well, bear in mind that the FNB Estate Agent Survey is dominated by the “high-volume” former Apartheid-era white suburban areas. Therefore, transaction volumes could still be expected to be dominated by members of the so-called White population group. Indeed this is still the case.

Thereafter, however, a sliding economy saw this percentage declining down to 46.2% by 2011. This is
to be expected, as a higher portion of the previously disadvantaged race group buyers are new entrants,have limited wealth yet built up, and are thus more income, employment and credit dependent than many of the older white repeat buyers.

In 2012, however, we have once more seen a rise in this percentage to 49.2% of total suburban buyers, implying white buyers dropping back a little to 50.8% from 2011’s 53.8%. This, we believe to be the lagged impact of a better performing economy since the end of the 2008/9 recession, along with lower interest rates, an effect which has also led to an improved 1st time buyer percentage.
The racial breakdown in 2012 for suburban home buying was estimated at 11.3% for Indian buyers, 8.8% Coloured buyers, 29.5% Black buyers, and 50.8% White buyers.

And the simple lesson? The faster the country can grow its economy (in a sustainable manner of course), the more rapidly it can racially transform residential property ownership. This was noticeable in the boom times up until 2008. We’ve made progress in racially transforming property markets no doubt. But when the economy stuttered in 2008, estate agents started
to suggest thereafter that the process had gone backwards a little, before 2012 saw the progress resume once more.