2012 was a slightly better year overall than 2011, in terms  of  house  price  performance, but  weak economic conditions as we entered this year suggest that  2013  average  house  price  growth  may  be slightly weaker. 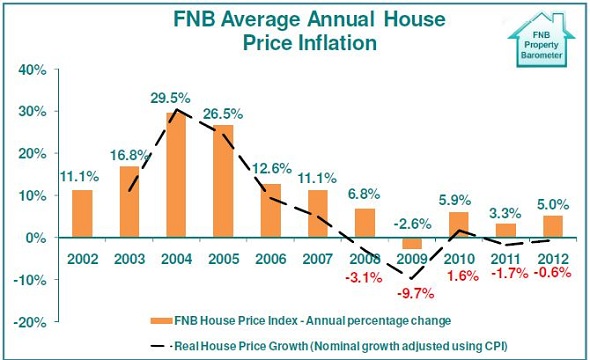 However, in real terms, when adjusting house prices for consumer price inflation,

2012 continued to show mild real house price decline to the tune of -0.6%, which was a lesser decline than the real decline of -1.7% in 2011. Nevertheless, slight improvement or not, the broad real house price “downward correction” continues, as it has for much of the period post-2007.

In real terms, the FNB House Price Index remained well-above levels of early last decade, with the real price average for 2012 still 70.7% above the real average price for 2001.

In nominal terms, the 2012 average price was 218% higher than the 2001 price level. Therefore, as at 2012 both real and nominal price levels remained still far above the pre-boom levels of early in the new millennium.

While the FNB Valuers’ Market Strength Index (Explanatory notes on page 4) continues to languish at levels below 50, implying that the valuers’ aggregated supply rating is stronger than the demand rating, the index nevertheless did point to a mildly better year in 2012, rising by 1.3% on the average strength level for 2011.

Being below a level of 50 probably still points to further real house price decline to come, though, despite the slightly improved level in 2012.

In order to look forward into 2013, it is probably necessary to consider some of the economic trends through 2012 as the year progressed. Doing this leads us to the expectation that 2013 will see slower average price growth than 2012, because the 2012 economy was very much a “tale of 2 halves”. The biggest contribution to overall house price growth in 2012 was made by economic conditions late in 2011 and in the 1st  half of 2012. At that stage, real economic growth momentum was relatively solid, with 3.3% quarter-on-quarter annualized real GDP (Gross Domestic Product) growth being achieved in the final quarter of 2011, followed by still-solid 2.5% and 3.4% for the 1st  2 quarters of 2012 respectively. So we entered 2012 on a strong economic footing.

The same cannot be said for the manner in which we entered 2012. By the 3rd quarter of 2012, the economy had begun to show serious “cracks”, with growth slowing to 1.2% as the global economy continued to be pedestrian, and large-scale domestic strike action disrupted economic output. While the GDP data for the final quarter of 2012 is not yet available, various industry statistics suggest that the growth rate may have deteriorated even further. By October, mining output was falling by -7.7% year-on-year, following on a series of declines throughout much of last year, while the Manufacturing Purchasing Managers Index had pointed to contraction in the sector for 3 consecutive months up until November, and some commentators believe that the economy may have contracted in the 4th  quarter. Real retail sales growth had also started to show some signs of tapering, growing year-on-year by only 1% in October.

No wonder, therefore, that the FNBBER Consumer Confidence Index was increasingly reflecting a deteriorating household mood as 2012 progressed, declining for the final 3 quarters of 2012. Real household disposable income growth was tapering, as too was household consumption expenditure growth. Although home buying is not classified as consumption, it is that same consuming household that buys the houses, and one would expect that weaker consumer confidence would rub off to a certain extent.

The end of the major strike disruptions of late-2012 should lead to some better economic growth quarters early in 2013. However, the reality is that we have approached and gone into 2013 on a very weak economic footing, suggesting that the early stages of this year could be a relatively soft period for  house  price  growth.  As  such,  we  expect  house  price growth for the year 2013 as a whole to be slightly more subdued than 2012, and pencil in nominal average rise of

Given  that  consumer price  inflation  looks  set  to  be  more around 5 to 6% this year on average, that would imply further “downward  correction”  in  real  price  terms  (when  house prices are adjusted for CPI inflation).

•    Ongoing financial pressure for many households, an overhang of the credit boom of last decade, which would lead one to expect that the search for affordability in housing remains priority for many.

•    Above-CPI inflation rises in municipal rates and utilities tariffs are set to remain problematic for home owners, and this can also exert some pressure on house prices, especially on the higher priced and larger sized end of the market.

•    While further economic weakness can lead to further interest rate reduction, recent years have suggested that the Reserve Bank is reluctant to cut, and any downward movement in rates (such as the lone rate cut in 2011) is likely to be almost insignificant.

Finally, the upside of expected very low price growth in 2013, for future aspirant investors at least, is that we would expect yields on housing to broadly increase further, as they have been doing gradually since after the boom years, slowly improving property’s attractiveness as an asset class.