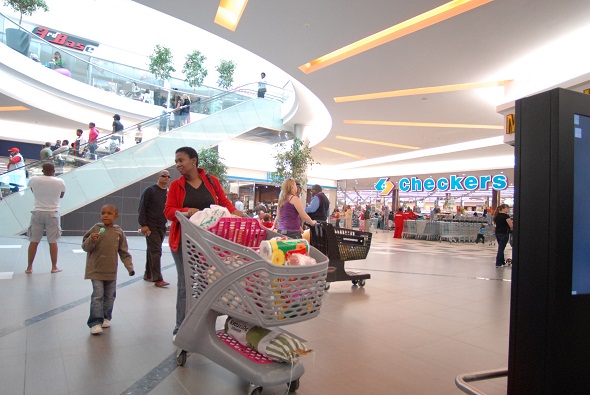 Interior image of Mall of the North shopping Centre in Polokwane

Not only is the mall’s popularity soaring, but General Manager of Mall of the North, Sumari de Ridder notes that the sale of its gift cards climbed strongly this festive season.

“Gift vouchers were a top shopper attraction. December gift voucher sales were driven by both individual shoppers and companies. The versatility of a gift voucher that can buy items at any shop or restaurant in a mall with over 180 stores gives it tremendous appeal as a gift.”

As the largest shopping centre in Limpopo, the award-winning Mall of the North caters to a diverse market. Shoppers flocked to the mall throughout the season and customer numbers hit extraordinary peaks on Saturday 1, Friday and Saturday 14 and 15, Friday 21 and Monday 24 December.

But, Mall of the North’s impressive festive season growth wasn’t without its challenges.

Roadwork traffic congestion on the main road approaching the mall had become a serious concern. However, intervention from the mall’s management resulted in the road’s main intersection receiving priority. It was completed by mid-December.

“We also launched a strong communication campaign, telling shoppers of alternative routes to the centre and highlighting the future benefits of the improved roads. We made sure we let shoppers know when the intersection opened,” says De Ridder.

Access is essential to Mall of the North’s trading success, especially with its convenient location as the final large shopping stop for tourists headed north, including those going across South Africa’s borders. With everything from foreign exchange to camping gear, the mall sends tourists safely on their way, well supplied, fed and entertained.

“Having all the major retail anchors and brands under one roof in a modern, safe, clean, air-conditioned setting gives Mall of the North its competitive advantage,” says de Ridder.

On top of Mall of the North gift vouchers, festive best-sellers at this mall included perfume and other health and beauty items, music and DVDS. “Buying clothing was also a high priority for shoppers in December,” says De Ridder.