Consumer price inflation for December was released today, providing the latest insights as to where the household sector is most or least pressured by price increases. 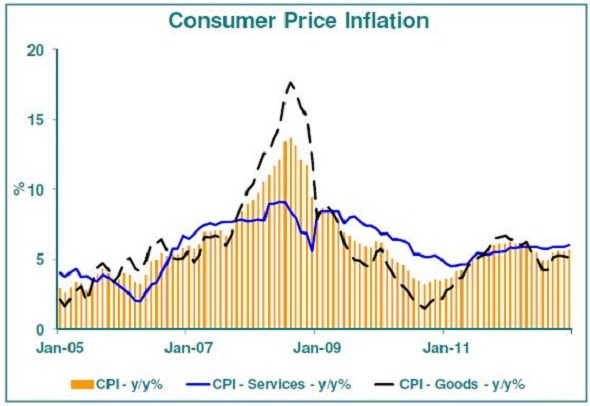 From a 5.6% year-on-year inflation rate in November, the December rate edged up slightly further to 5.7% year-on-year. This slight rise was due to a slight increase in year-on-year petrol price inflation in December, compared to November, which can’t be viewed as too significant.

Besides now hovering at near to the upper target limit of the 3-6% inflation target range of the Reserve Bank (SARB), higher consumer inflation takes a bigger bite out of household disposable income than back in 2010 and 2011, exerting downward pressure on real household disposable
income growth, and this forms part of our reasoning for expecting lower real consumer expenditure growth in 2013, as well as slower real retail sales growth.

Examining the key components of CPI inflation, Food and non-alcoholic beverages inflation remains the most troublesome component of the CPI, contributing 1.1 of a percentage point to the overall inflation rate. This is of particular concern at the current time due to food prices exerting greater financial pressure on the lower income groups, at a time when the risk of social upheaval is not insignificant judging by late-2012 widespread strike action. Its inflation rate is, however, significantly lower than the double-digits of a year ago, at 6.9%, but the sheer size of the food weighting in the consumer “basket”, especially that of the poor, makes it a troublesome one still.

The other big ticket inflation item is the Transport sub-index, contributing 1 percentage point to the overall CPI inflation rate and showing inflation of 5.5%. Keeping this overall index below overall CPI inflation is slow vehicle price inflation, but its fuel cost component is the troublesome one, caused by a significant year-on-year fuel price increase of 12.4% year-on-year. Its public transport sub-index was also showing a high 15.5% inflation rate, arguably caused largely by rising fuel costs.

Another major sub-index with problematic elements is the Housing CPI which, although only showing 6% inflation, possesses the electricity sub-component which showed 10.3% inflation as Eskom continues to ratchet up the tariffs, while the “Water and other services” component (including municipal rates) was not far behind at 9.1% inflation.

A final sub-index that deserves mention for the wrong reasons is that of education, which shows an inflation rate of 9%.

One of the big” unsung heroes”, however, in working to contain overall CPI inflation, has been the heavily weighted rental and owners’ equivalent rental components, whose inflation rates are 4.8% and 4.2% respectively, well below the overall CPI inflation rate and together weigh a large 15.7% of the total CPI. Therefore, a weak rental property market is instrumental in containing consumer inflation and keeping interest rates low.

Other noticeably low inflation rates belong to the “Clothing and Footwear” CPI with a 3.2% year-on-year rate, “Household Contents and Services” with 3.3%, “Communication” at 0%, and “Recreation and Culture” with a 2.7% rate.

A key area to watch in the near term is the residential rental market for signs of strengthening, which could drive CPI inflation higher due to its heavy weighting in the CPI. Recently, we have seen the rental inflation rates rising ever so slightly in the index, although still very much subdued. Along with this, food price inflation is key, and of concern has been recent double digit price inflation in the Producer Price Index for Agricultural Food, suggesting that the impact of the recent global food price surge from US drought conditions may not yet be over. The third major item to watch is oil and petrol prices. Here, though, signs are more encouraging perhaps, and one would expect to see slowing year-on-year petrol price rise as high base effects from prior oil price surges look to be taking some effect, slowing the year-on-year oil rand oil price inflation in recent months.

All in all, it isn’t clear that consumer price inflation needs to continue to rise much further in the near term. But starting the year at 5.7% year-on-year, slightly higher than last year’s average rate, and with recent signs that nominal disposable income growth has been slowing in line with a slower economic growth rate, the expectation of slower real disposable income, real consumer expenditure and real retail sales growth in 2013 remains intact.

Finally, important to note is that the consumer inflation impact remains greater on the lower income groups than on the higher income groups, and much of this is due to food price inflation still being above overall CPI inflation, and of course the food component being a far higher weighting in the low income expenditure baskets.