While the market in residential property developments has slowed and many of the smaller borderline developers have all but disappeared in these lean times, there have been “bright spots in the market and indications are that the development market is in the process of a gradual recovery”, says Pam Golding Properties (PGP), Hyde Park region development manager, Peet Strauss. 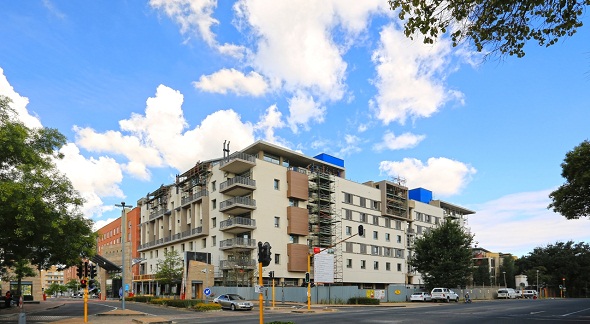 “Recently we have seen a marked increase in activity from developers who are achieving good value from rentals. In the past many of these developers would have focused exclusively on selling their properties. Now they have shifted focus and are taking a longer-term view in this regard,” notes Strauss. “The buoyant rental market has encouraged a number of creative, smaller developers who were unable to weather the challenging times to look for new opportunities to re-enter the market,” adds Strauss.

Jonathan Davies, PGP joint area manager, Hyde Park office, says developers are increasingly talking of ‘developing to hold’. This means that the developer will develop a property and sell as many units as necessary for it to be sustainable over the shorter term. Other units are kept as rentals for a time when the market will once again improve. Developers may keep as much as 30 to 50 percent of their units for rental with the intention of selling them two to three years following completion.

“Not surprisingly the banks have been reluctant to extend credit to developments that pose the slightest risk,” observes Davies. “They will only extend credit to developers with proven track records and enough equity and sales to cover their exposure by not less than 120%. This has made life difficult for smaller developers. However, we believe that we are entering the beginnings of an up turn in the market and that properties in developments must come back into demand as supply begins to run out. This will likely see banks relaxing their lending criteria somewhat.”

In light of the sluggish development market over the past few years PGP in Gauteng has followed a careful strategy of partnering with larger, more sustainable developments, and has committed itself to their marketing beyond the development phase. “It is an approach that has paid dividends. During this period, PGP has successfully marketed apartments in major developments such as Melrose Arch and The Houghton. In spite of the economic slow down, Hyde Park Developments based at Melrose Arch achieved R350 million in sales between September 2011 and September 2012. Furthermore PGP has taken on new development stock of close on R1 billion,” says Rupert Finnemore, PGP joint area manager, Hyde Park office.

According to Finnemore there have been a number of benefits of working with developments in this way: “We market units not only during the off-plan phase but also once the buildings are completed and the development becomes more established. This ensures ongoing sales within these developments. An excellent return is also made from rentals to the corporate market, which has increased by 30% in the last 12 months. This strategy has worked particularly well for PGP in Melrose Arch. The Houghton is also gaining momentum on the back of completed units that have now been successfully transferred to their new owners.”

Among the new projects have been added to PGP’s portfolio is the Sandton Gautrain Station Project, which will extend the building which houses the Radisson Hotel across from the Gautrain Station. Davies says the building will be extended by six floors and PGP will be marketing residential units ranging in size from 118 to 160sqm.

“Having noted the demand for developments to cater for the needs of the market in each specific residential area, we are looking at becoming more involved with developers in the planning phases of residential developments. Tastes and requirements differ among individuals and from suburb to suburb and lifestyles change over time, and naturally developers need to be in tune with what the market requires if they are to build homes that will sell. PGP has the necessary knowledge to guide them in this regard.”

“In the near future we will be exploring development opportunities along the north/south and east/west development corridors, as defined in the densification strategy in the Johannesburg City Council’s spatial development plan,” says Davies “Initially, these corridors will provide opportunities for development projects, as well as a supply a stream of resale stock in future. We feel it would be important to focus on areas close to the transport nodes and especially the Gautrain nodes such as Rosebank, Sandton, Buccleuch, Midrand and Centurion in Pretoria.”

“We expect to see residential development property enter into another demand cycle over the next two years, which augurs well for developers,” concludes Davies. “Some developers are already seeking suitable land in anticipation of this with a view to completing their developments by 2015.”