Nedbank Corporate Property Finance has partnered with emerging market pioneer McCormick Property Development to finance a new retail development called Olievenhout Plaza in the north of Johannesburg, and its investment arm has acquired a 25% equity stake in the development. 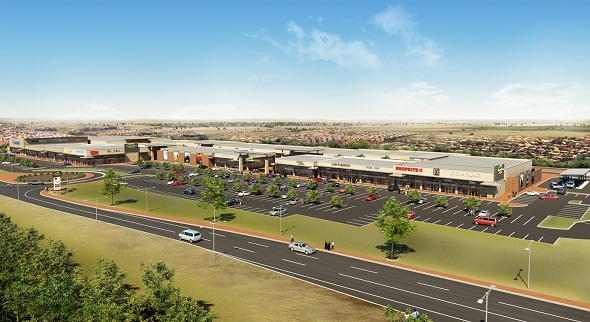 McCormick Property Development has forged the way within the South African emerging market since 1983 and has completed 52 developments to date with a combined value of over R7 billion.

The Olievenhout Plaza will have a total GLA of 16,314 m² with 50 shops and is planned to be completed in June 2013. It offers good visibility and accessibility as well as direct exposure to passing traffic on the R55 between Midrand and Centurion. This will only improve as a result of the future construction of a new road planned to link Uitsig Road in The Reeds/Rooihuiskraal to Summit Road which is the link between the Ben Schoeman Highway and R511 (William Nicol).

Olievenhout Plaza boasts high tenant demand. Shoprite is one of the main anchor tenants and is located on the western side of the mall. Significant national fashion tenants, furniture retailers and banks will also be represented in the mall. A Midas store will be situated on the exterior of the mall, as well as two freestanding stores for Cashbuild and a KFC drive-through. There will be open demarcated parking bays and a new petrol station has been completed on the southern side of the site.

Residential development that has taken place in the surrounding area over the last three years as well as the proposed future development both within the Olievenhoutbosch area and within the larger catchment area supports the view that suburb demand continues to be good.

McCormick Property Development is remaining true to its pioneering roots by developing some of the most significant retail and mixed-use schemes on the African continent. The company’s portfolio has grown to over R4.4 billion worth of property under ownership and management, and about R7 billion worth of retail projects in the immediate pipeline. The portfolio showed strong growth even through the recession due to strong retail mixes and attentive hands-on management. Founded by Chairman John McCormick 29 years ago, the company established itself as the first company of its kind in the country specialising in the development of shopping centres in the rural areas and former “homelands”. Working closely with local communities since inception, the company set up the first ever BEE scheme in the country in 1985 and remains fully committed to broad based economic empowerment to this day.

Recent developments from McCormick Property Development within South Africa include Thorntree Shopping Centre and Chris Hani Crossing in Gauteng and Edendale Mall in Kwazulu Natal. The company is currently developing three of the largest malls in sub-Saharan Africa outside of South Africa in Matola, Mozambique; Harare, Zimbabwe and Luanda, Angola.

“As a market-leader within its niche of development in South Africa, McCormick Property Development is a key client for Nedbank Corporate Property Finance. The company’s substantial retail track record and consistent ability to deliver is proof of its inimitable ability to continually deliver successful, world-class, sustainable real estate and Olievenhout Plaza can be expected to be of excellent quality. The deal highlights Nedbank’s dedication to investing in platforms aimed to uplift and empower all stakeholders, especially partnerships that uplift communities and develop under-serviced areas,” concludes Reynolds.
Tweet