The FNB House Price Index for November 2012 showed further slowing in its year-on-year inflation rate, from a revised 2.5% in October to a lowly 0.5%. This is the 8th consecutive month of tapering growth since the relatively impressive 8.4% peak in year-on-year growth reached in March 2012. The average value of homes transacted in the FNB House Price Index was R819,733 in November. 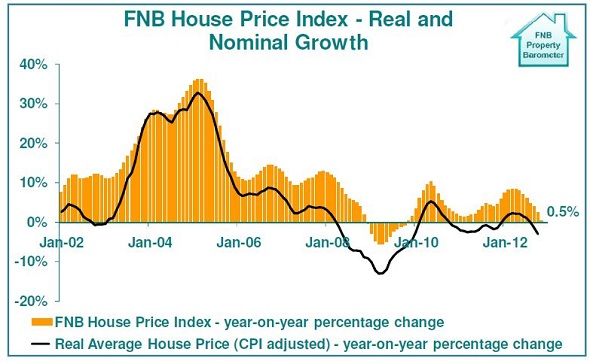 Their Estate Agent and FNB Valuer surveys do point to a mildly stronger market today than a year ago, after some improvement earlier this year. However, they also suggest that the most significant improvement in residential demand came earlier in 2012 after a good economic period in Summer of 2011/2012, and much of that improvement in demand may have already been reflected in stronger year-on-year house price growth of around 8% earlier in 2012.

And while the valuers and agents have witnessed demand improving earlier in the year, they haven’t been pointing to a market that is yet realistically priced, or “under-supplied”, on a national average basis. This means that as soon as there is an absence of any new stimulus, price growth very quickly slows back to low rates.

HOW FAR HAS THE MARKET (DOWNWARD) REAL PRICE CORRECTION PROGRESSED TO DATE?

According to the FNB House Price Index, the peak of real house price levels at the end of the most recent boom was in February 2008. From that month up until October 2012, the cumulative real house price decline was -18.9%. While this appears to be a significant downward correction, the real price level remains +58% higher than July 2000, the starting month for the FNB Index and also a period early in the last house price boom. In nominal terms, since February 2008 the cumulative increase up until November 2012 was a very mild +7%, although still a massive +213.2% up on June 2000.

However, at this stage, economic indicators make it difficult to see much improvement in housing market conditions in 2013, after having seen some improvement earlier this year to what has been a relatively “comfortable” 2012 in the residential market.

Therefore, looking forward into 2013, while year-on-year price growth may pick up a little from the November low level, FNB expects that overall house price growth will be a little slower in 2013 than the average for the entire 2012.This is based on their view of the global and domestic economy, as well as on the level of household sector indebtedness.