The construction of Sandown Road through to the M12 and N7 highway has commenced. This R82 million project, which includes a road-over-rail bridge as well as ancillary underground services, started in September 2012, and the first traffic is expected to roll across the new road and bridge by December 2013. 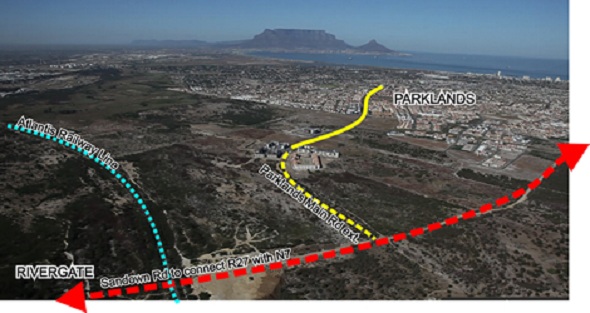 The new link will greatly assist in easing the traffic flows in and out of the Table View and Bloubergstrand areas, and will provide much needed access across the Diep River to the City’s central and Northern suburbs. The M12, when completed, will give a more direct access through to Cape Town International Airport and the N2 to Somerset West.

This R82 million project is largely being funded by The Milnerton Estates, Garden Cities, and the Aska Property Group, who have formed a consortium to manage the contract. The City is an integral member of the team and its contribution is towards the bulk services required and the cost of facilitating the future BRT that will, in time to come, run down the centre of Sandown Road.

The new Sandown link will unlock the potential of the areas both West and East of the existing railway line, and will open up exciting new commercial and retail opportunities, extensive tracts for light industrial development, and residential development opportunities in both the upmarket and more affordable housing sectors.

Such development will be an extension of the “Live, Work, Play and Invest” philosophy, with housing being developed concurrently with schools, civic facilities and employment opportunities. It is hoped too that the development of the area will encourage the conversion of the existing railway line into a passenger facility – this in addition to the BRT system which is already planned for the area.

This huge investment into extending the infrastructural services network reflects the ongoing commitment by the Developers into the growth of the area. It is but the first of many such investment spurs and reasserts the Developers’ belief in the future potential of the greater Table View/Bloubergstrand region.

Tony Clarke, Director of the Aska Property Group, and speaking on behalf of the development consortium, says that the commissioning of Sandown Road through to the N7 is the most exciting infrastructural development in a very, very long time. It will unleash the enormous potential of the area. The newly opened development will be central to the future greater Table View urban and residential region. It has the easiest of access to and from the R27, M12 and N7 highways and is ideally placed for Regional Business and Commercial Centres.

The intended development has been on the cards for some time now and it has been no secret to the bigger players in the development world. Enormous interest has already been expressed in the new development and negotiations are already well under way with various interested parties, all of whom want to be part of the inevitable growth and success of this newly developing sector of the West Coast region. Interested parties can call Dave Macleod-Elliott (Sales Director for Aska) for further information on 083-453-7777.