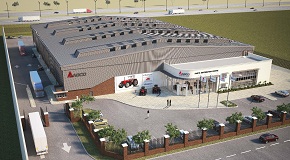 Nedbank Corporate Property Finance has announced the conclusion of a R53 million loan agreement with the developers of a 7 000 square metre agricultural parts distribution centre in Pomona in Gauteng.

The developers of the centre, Farm Rietfontein 31 (Pty) Ltd, are a subsidiary of the highly respected Griffin Group, with whom Nedbank Corporate Property Finance has had a long and mutually beneficial relationship.

According to Ken Reynolds, regional executive of Nedbank Corporate Property Finance in Gauteng, the development is a significant one for both the property and agriculture sectors in South Africa as the sole tenant AGCO South Africa (Pty) Ltd intends using this location in Gauteng to launch itself into South Africa and the rest of Africa.

“AGCO South Africa (Pty) Ltd is a subsidiary of the AGCO Corporation, a NYSE-listed global manufacturer of agricultural equipment distributed across 140 countries worldwide. The group has specifically established AGCO South Africa to secure a foothold in the SADC region and serve as a springboard for its operations to expand into sub-Saharan Africa,” explains Reynolds.

AGCO has already signed an initial 10-year lease agreement on the property, which comprises 6 249 m² of warehousing space, 405 m² of offices, a 160 m² showroom and 75 m² for ablutions. The loan agreement also includes an allowance for an additional mezzanine level of 640 m² and expansion space of 2 000 m², both of which have been requested by the tenant.

“The convenient positioning of the new AGCO parts distribution centre in Pomona, with its easy access to OR Tambo airport, makes this an ideal location from which the company will be able to give effect to its national and African expansion plans, which will almost certainly deliver broader-scale benefits for a variety of SA industries and the country’s economy as a whole,” says Reynolds.

He points to AGCO’s existing brand presence in Africa for the past 50 years as proof of its commitment to agriculture on the continent.

“The organisation has already set aside around US $100 million for investment into sub-Saharan Africa over the next 36 months, and with plans for two training centres in Zambia and South Africa as well as model farms for the training of emerging farmers, AGCO’s commitment to the development of agriculture in Africa is clear,” he adds.

Reynolds explains that this type of multi-benefit property finance focus is what has enabled Nedbank Corporate Property Finance to establish itself as a leading commercial and industrial property finance partner in the country. 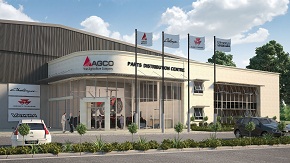 “While Nedbank Corporate Property Finance is obviously primarily committed to the development of South Africa’s property industry, we are acutely aware of the fact that such development is largely dependent on the success of many of the country’s other sectors and industries, which is why we are excited by developments like this one by Farm Rietfontein 31. This offers obvious benefits across markets and sectors and have the potential to grow South Africa’s economy and its status as a global gateway to Africa,” concludes Reynolds.
Tweet