Even in the face of lacklustre demand for office space, uncertain economic conditions and jaded business sentiment, the number of committed new office developments is increasing steadily.

Office vacancy rates have been moving sideways since 2010. Contrary to what one might suspect intuitively, this was seemingly not only attributable to a lack of growing demand but also to an upward trend in committed new supply (see corresponding graph). In the third quarter of 2012, the amount of new committed developments was roughly 700.000m², 53% of which was still unlet. But, the prospects for office space demand — which might affect the take-up of existing and new space — remain dull in the wake of disappointing employment figures. Considering the broad-based uninspiring growth in the economy, it came as no surprise that in the third quarter of 2012 the unemployment rate edged up to above 25%. The importance of conditions in the labour market to office property is illustrated by the graph that follows. 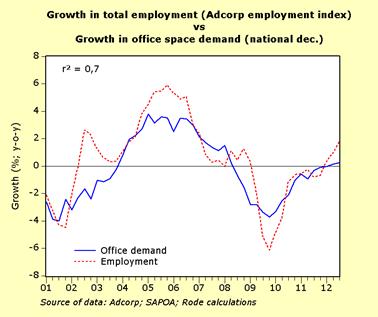 The graph shows the robust correlation between growth in total employment — as measured by Adcorp — and growth in office demand. In the reporting quarter, total employment grew by a yearly rate of just under 2%, while office demand showed growth of 0,2%. Over the period displayed in the graph, total employment growth explained roughly 70% of the growth in office space demand. This means that the demand for office space cannot be expected to grow in the face of poor employment conditions. What’s more, combine the continued uncertain economic growth prospects with low confidence levels amongst business decision makers, then the take-up of new developments might not be as robust as perhaps hoped for by the developers. 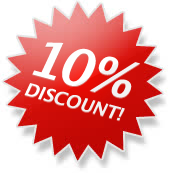 So here’s the deal: Rode is offering new subscribers a once-off special on our authoritative Rode’s Report on the SA Property Market – both the print and online versions – at a 10% discount, provided you order and pay before the end of January 2013.