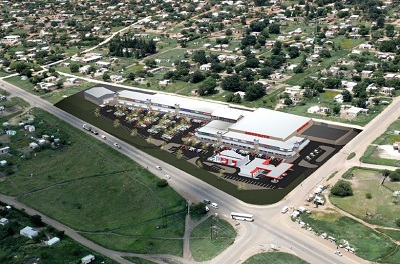 The approval of a R58 million finance deal by Nedbank Corporate Property Finance to Moratiwa Property Development (Pty) Ltd will see the small mining town of Bapong in Rustenburg receive an economic boost as a result of a new 10 000m2 retail centre nearby.
“Ken Reynolds, regional executive: Nedbank Corporate Property Finance, Gauteng says that there is an increased demand for neighbourhood shopping centres, “Nedbank is pleased to be involved in this property development as it falls under the bank’s strategic objective of providing a significant economic boost to the local community in a previously under-serviced area for the benefit and empowerment of all stakeholders involved.”
The proposed site is located at the intersection of the R556 Pretoria and the Modderspruit/Brits Road near Rustenburg in the small rural village of Bapong. The node has been classified as an economic activity area focused mainly on mining.

“Studies conducted in similar mining communities have revealed generally higher retail expenditure per capita largely due to the higher levels of employment in these areas and inherent subsidies such as housing and medical aid, resulting in increased purchasing power per household.

“The shopping centre will benefit from direct exposure to passing traffic from the N4 towards Sun City. The average daily traffic report records approximately 8 500 vehicles passing the site over the weekends which will result in great inflow for the centre,” says Reynolds.

The suburban strip retail centre has a total GLA of 10, 397 m2 and can accommodate approximately 36 shops. The centre will boast 80% national presence anchored by Shoprite and other approved tenants include Mr Price, Jet, Edgars Active, Build It, Pep, Barnetts, Price n Pride and KFC. A school and an informal taxi rank are located across the road from the site and the centre’s primary catchment comprises of Bapong Village, Modderspruit, Bosfontein and Segwaelane Village located eight kilometres towards Sun City.

Reynolds adds that the centre is backed by solid ownership and an experienced development team and Nedbank Corporate Property Finance tailored a custom-made finance deal that enables the company to proceed with this new development.”

Fouche and Masemola have developed, in conjunction with Vukile Property Fund Ltd, the 12 000 m² Moratiwa Crossing Shopping Centre in Groblersdal and are currently involved in a development with McCormick, collectively holding a 35% stake in the neighbourhood centre known as Theku Plaza in Newcastle.

“This is a new client for Nedbank Corporate Property Finance with great potential for future growth,” adds Reynolds, “and we are proud to be associated with Keyaborona Shopping Centre and respected businessmen such as Fouche, Masemola and Skinner.

“Latest reports confirm the recovery of the retail sector and the growing opportunities for retail development in rural markets. Trading density figures have shown a strong improvement since 2010 remaining below inflation across all shopping centre sizes. Smaller community centres have, over the long term, shown solid performance and this indicates increased demand for this type of retail development.

Occupation date commences in September 2012 and trading is anticipated to commence in December 2012,” concludes Reynolds. “We believe that Keyaborona Shopping Centre will contribute to the economic empowerment of the community, as well as generating retail job opportunities.”