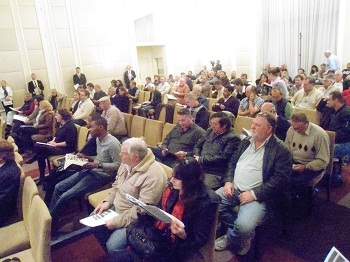 The ClareMart Group hosted their well-attended Monthly Multiple Property Auction at the One & Only Hotel, Waterfront, on July 24.

The ClareMart Auction Group hosted their monthly Multiple Property Auction and final auction of that name at the One & Only Hotel on Tuesday, July 24. The auction was well attended with many members of the public registering to have an opportunity to bid on properties across the Platinum Residential, Flash Property and Commercial and Investment sectors.

“Our Group was pleased with the outcome of several categories, namely the Platinum Residential sector and the Commercial and Investment sector which saw a property sold prior to the auction due to the extensive pre-event marketing. It was also the final Multiple at the One & Only and our Group is looking forward to returning to our permanent home at the newly renovated Radisson Blu at the end of August” says Group Executive Director, Andrew Koch.

An entire un-sectionalised 32 unit apartment block in the Vasco Estate node of Goodwood was sold by the Claremart Auction Group prior to auction for R9.5million. “We extensively market our Multiple Auctions and the properties within the portfolios. The result of this direct marketing, public relations and advertising has occasionally resulted in us selling high demand properties prior to the scheduled auction” says Koch.
A penthouse in a modern luxury Hartenbos apartment block was sold for R4.8million by the Group during their Platinum Residential Portfolio Auction. “This exclusive residence is situated in a new designer sectional title estate and our group is very pleased with this outcome seeing as nationally there is a downswing in demand and prices achieved for holiday and luxury homes and apartments. Despite this our Group has continued to see success in this category and Pansy Cove was no exception” adds Koch.

Claremart will be returning to the Radisson Blu hotel, Granger Bay, for their August Multiple Property Auction on Wednesday, 29. The Group was accommodated by the One & Only during a period of renovation and refurbishment at their official “Multiple Home” .For information on the August Multiple Property Auction contact Andrew Koch on 021 425 88 22 or visit www.claremart.co.za